Expected Keynotes Microsoft will probably announce at the Surface event- 2019

Microsoft is holding a special Surface hardware event in New York City on the 2nd of October. The event could serve as the first unveiling of Microsoft’s dual-screen Surface device.

It is remarkable that Microsoft announces this event as your primary guide to disruptive technology. They are also going to throw light on the fact about how it will impact people and businesses, today and tomorrow.

So, are you inquisitive about what Microsoft has in store for its diverse product lines? Then you should check out the annual Surface Event this year. We are anticipating quite a few announcements about the latest products Microsoft plans to offer.

The event will highlight presentations from several Microsoft executives. The discussions will be held about features and future technology and applications such as Quantum Computing and HoloLens.

Microsoft has been developing a new dual-screen device which is codenamed as Centaurus. They have been working on it for more than two years. The device is designed to be the master device for a surge of new dual-screen tablet/laptop combinations that will be developed throughout 2020.

Microsoft has demonstrated Centaurus during an internal meeting previously this year, indicating that work on the prototype has advanced to the point where it’s nearing release. But it is not certain that Microsoft will bring out this new hardware in October or even launch it.

Microsoft CEO Satya Nadella has notedly shot off the Surface Mini just before its scheduled unveiling. The idea is not yet planned by Microsoft to show this dual-screen Surface device and so the devices won’t be ready to ship soon. However, with Microsoft’s plans, The Verge describes that the company is now targeting a 2020 release date for its dual-screen Surface.

The surface is Microsoft’s touchscreen personal computer, which is something in between a laptop and a tablet. It is actually something between a tablet and a laptop. The concept images imply that Microsoft is going to unveil a new Surface Pro complete with next-gen Intel CPUs, as well as an ARM CPU-powered “skinny” version.

Beside Centaurus, Microsoft will likely stimulate other Surface devices. The Surface Book is running late for an update. Microsoft’s Surface Laptop and Surface Pro hardware can now see the additions of USB-C ports this year. The Surface Go tablet is more than a year now and can opt for some change.

Microsoft is all ready to deliver the goods in the hardware season. In the past few years, there were a lot of new devices shown in the Big Apple this week.

Last year, Microsoft launched a new version of the Surface Pro. it had Laptop and Studio and added over-ear headphones to the lineup. This time out, we’ve already seen several slips that point to additional refreshes and a couple of big “surprises” in as much as the products in news can truly be a wonder.

What to expect from Microsoft Surface event- 2019? 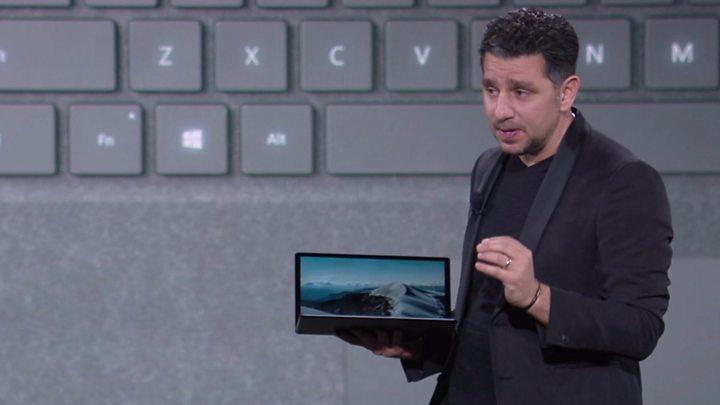 We’ve said it before, and we’ll say it again: New and innovative things are coming at the #MicrosoftEvent. Tune in Oct. 2 live on Twitter at 10am ET to see why we’re #pumped. pic.twitter.com/MV8HSCd54Q

There will be additions in the Surface Pro and Laptop both. Surface Pro 7 is getting an introduction to a new upgrade. They are possibly the most underwhelming of the event. They are also including a new Intel processor and a USB-C port. The company is making a great effort to bring the device somehow this year with new enthusiasm. The Surface Laptop 3, is going to have two choices in its design: a 13-inch and 15-inch inch model, along with, potentially, a new AMD processor.

Also with the Surface Pro and Laptop are both said to be getting refreshed this year, Microsoft is embracing the ARM for Windows 10 platform with its Surface line. There are expectations that they are planning to launch an ARM-powered two-in-one at the event. Among the advantages are a more modest footprint and far improved battery life — both marked benefits for any portable.

However, the biggest reveal of the show is the long-awaited addition of a dual-screen Surface. It has been a long time since Microsoft abandoned Courier. They are supposed to declare a new form factor for the line. There has been a rumor which includes a bespoke version of Windows 10 also named Windows 10 X. It points to the potential launch for the device later this year.

Lastly, we’re anticipating to see research on Project Centaurus. It is the much-awaited dual-screen, 2-in-1 device. Centaurus is assumed to be having a unique design. It could be either a foldable, tablet-sized device or a clamshell device with two screens and no physical keyboard.

Besides that, they are saying that the Centaurus will also run on a separate operating system known as Windows Core OS. It might not be possible to provide an actual walkthrough of Centaurus during the October Surface event, but people are expecting it to at least make an appearance.

According to a report in Techcrunch and Digital Trends, Microsoft is planning to broadcast the Surface Event. You will be able to catch the Livestream via Microsoft’s website for it. Also, once the broadcast is available, you can get to watch it on Digital Trends as well.

You can also follow the event on Twitter. Editor-in-chief Jeremy Kaplan and Computing Editor Luke Larsen will be present for the event, and the official Surface account will be updated as announcements are made.

We will keep you updated regarding any other official announcement for the Surface event and about the details of keynotes that will be shared in the Microsoft Surface Event. Stay connected with your technology partner to get regular updates on upcoming technologies and events that can prove helpful for your business.

App creators who gave the world solutions such as Facebook, Snapchat and Instagram, they are seeing withdrawal symptoms among the … END_OF_DOCUMENT_TOKEN_TO_BE_REPLACED

How Cowboy e-bike Startup Executed Their Idea and Raised 10 Million Euros In Funding?

Cowboy is a Brussels-based e-bike startup that combines design style, affordability, and technology to connect owners to their electric bikes … END_OF_DOCUMENT_TOKEN_TO_BE_REPLACED

Coruscate has recently moved to ClickUp in work from home times. We are so much impressed by ClickUp and smoothly … END_OF_DOCUMENT_TOKEN_TO_BE_REPLACED

What will be the impact of MacOS Catalina on app development?

In a two-hour keynote at the annual Google I/O Conference, the company has made many important announcements. Don’t worry if you … END_OF_DOCUMENT_TOKEN_TO_BE_REPLACED

Why Laravel is the Best PHP Framework?

Apple’s recent event WWDC redefined iOS app development, by introducing a couple of features that would prove to be useful … END_OF_DOCUMENT_TOKEN_TO_BE_REPLACED

Coruscate Proud to be Named a Top Ruby on Rails Developer in India by Clutch!

Here at Coruscate, we recognize it can be hard for any business to stay ahead of the competition while also … END_OF_DOCUMENT_TOKEN_TO_BE_REPLACED